Lighting is intended to provide functional and aesthetic effects. A common way to illuminate an indoor space is to add windows or skylights to let the sunlight in. Light fixtures and lamps are used as artificial light sources.

Task lighting is a concentrated form of lighting used for functional purposes, such as for reading, cooking, or working. It can be localized on a single spot of the room.

What you can find in this article

You need up to 1200 lux of task lighting for regular reading. Therefore, accent lighting is primarily for decorative purposes, such as landscaping and highlighting certain interior elements. General or ambient lighting is used for general illumination of an indoor or outdoor area. General lighting can be as low as 20 lux, which is adequate to help you spot obstructions when navigating your way inside a room or garage. You need bulbs to illuminate an outdoor or indoor space.

Here are common types of bulbs that you can find in stores:

How does LED work?

LED is a type of diode or semiconductor that emits light when an electrical current passes through it. Light, both visible and invisible, is made of the emitted photons. It’s essentially a form of energy that works like a particle that can be reflected by many materials. Early LEDs were low-intensity models, usually used in calculators and indicator displays as seven-segment components.

Compared to incandescent and fluorescent light sources, LEDs have more advantages, such as a long lifetime, lower power consumption, smaller size, faster switching, and better physical robustness. LED lamps are more complex with support components, while incandescent bulbs are much simpler and you can connect them directly to unregulated AC or DC power sources. 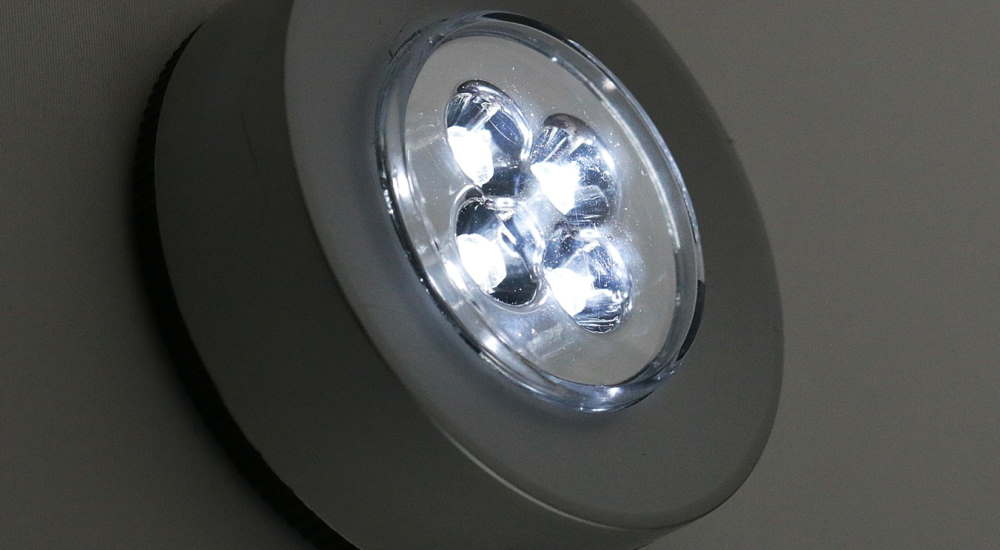 LED lights save the energy

LED bulbs are more suitable for outdoor uses because they can withstand low temperatures during winter. It’s also the reason why LED lamps are popular choices for refrigerated display cases, cold storage spaces, meat lockers, and freezers. LED lights also have better dimming characteristics, because electric currents can be adjusted to increase or decrease the light intensity. Many newer LED lamps have built-in electronic circuits and Wi-Fi support that allow integration with a smart home network. Long-lasting smart LED lamps can last for 10 years, which adds convenience and functionality to your home. Because LEDs can be made very compact, they suit your design preferences better. Some LED lamps are designed to appear like incandescent bulbs for aesthetic purposes.

LEDs produce light due to a natural phenomenon, known as electroluminescence. In semiconductors, electrons move more easily between energy bands. When an electric current is applied to the LED, its P-N junction emits light. Electrons travel from the N-region to the P-region of LED, when current flows through it. Energy will be emitted as light and heat when electrons are recombined in the P-region. Gallium phosphide (GaP) and gallium arsenide phosphide (GaAsP) semiconductors emit photons or lights when electrons dissipate energy. Advances in materials technology make it possible to produce photons at different wavelengths to get light with different colors.

It is immediately clear that there’s no filament or gas that heats up and glows in LED lamps. It means, that LED lamps operate at much lower temperatures and this has an impact on their life expectancy. It is easier to focus or disperse light in LED bulbs, so they can be used as a task or ambient lighting, depending on the purpose. LED bulbs that produce 800 lumens consume less than 10W of power. In comparison, incandescent bulbs need 60W, halogen bulbs 40W and CFL bulbs 15W to produce 800 lumens as well. Philips ultra-efficient LED bulbs may last up to 45,000 hours of continuous use, while incandescent bulbs last for 1,000 hours and CFL for 10,000 hours on average.

Warm fixtures can be installed in one room, and cool fixtures in another. For example:

If you’re looking for home-office lighting read on a topic we’ve written about before.

Despite their many benefits, it is important to obtain LED bulbs from reputable manufacturers. Based on the DC power component of the lamp structure, LED lamps may cause micro flickers and contribute to increased eye strain. You also need to choose the right LED lamps from different parts of your home. Avoid using LED lights with higher color temperatures at more than 5,000 K, for your bedroom because they emit bluish-white light. They may disrupt your circadian rhythm, resulting in intermittent sleep or sleeplessness.

LED bulbs are not only more efficient, cooler, and durable. There are other reasons why you should consider replacing existing incandescent, halogen, and CFL bulbs in your home with LED. Due to their longer lifespan, LED bulbs have fewer environmental impacts. Incandescent bulbs have a much higher carbon footprint due to significantly higher power consumption. Because incandescent lamps don’t last as long, you need to replace them more often. Material extractions and manufacturing processes of incandescent and CFL bulbs put more pressure on our environment. Any responsible consumer should choose products with a longer lifespan to contribute to preserving the environment.

GomeGlobePro.com participates in several affiliate advertising programs. Some posts may contain affiliate and referral links. If you use these links to buy something we may earn a commission.